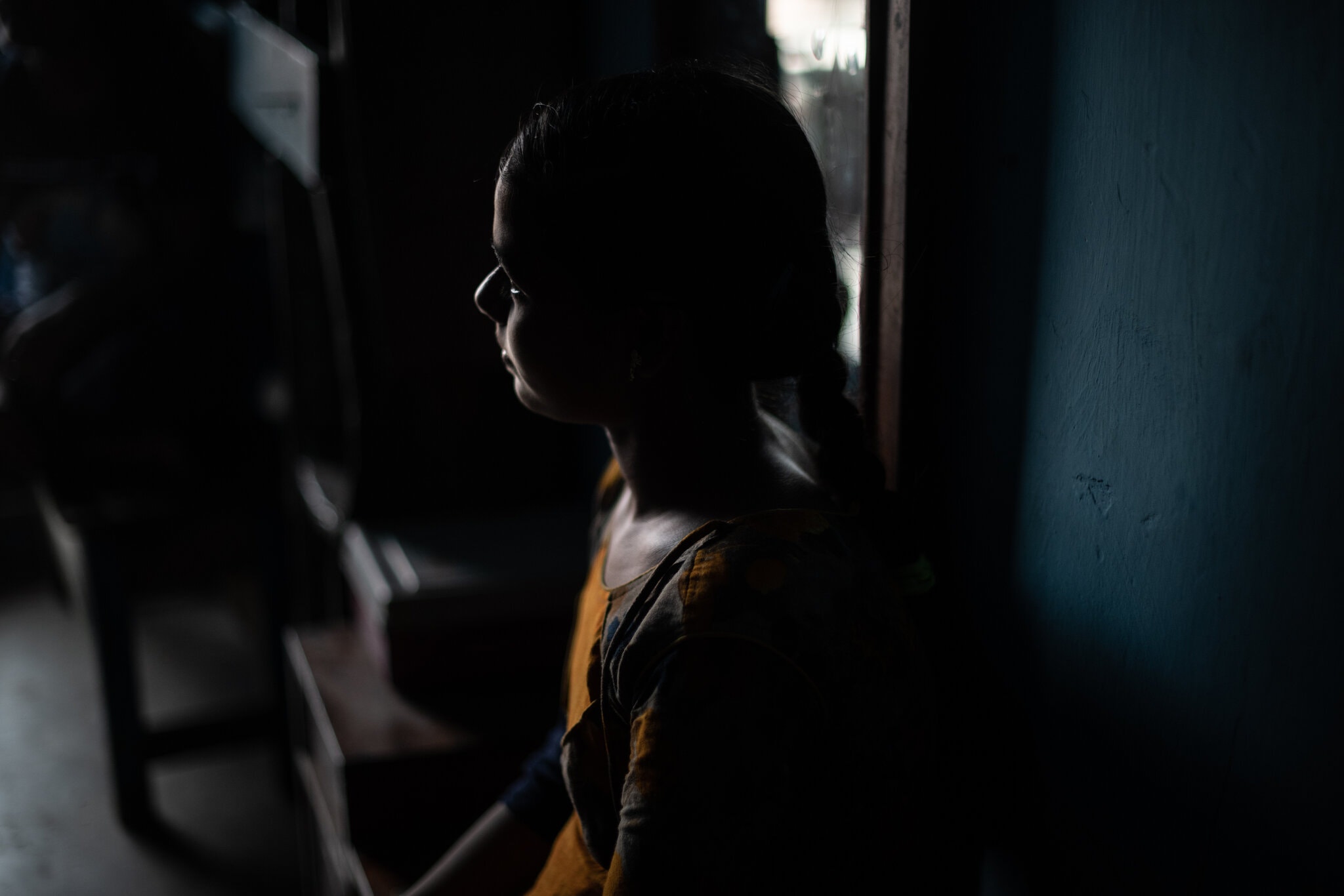 G. Sonali Reddy, 14, in the village of Pattapur in the state of Odisha in India. She was orphaned along with her siblings when their mother died from Covid-19.Credit…Rebecca Conway for The New York Times

Thousands of children lost their parents during a calamitous wave of infections. While the government is vowing to help them, many face the risk of neglect and exploitation when the attention fades.

By Suhasini Raj via The New York Times

PATTAPUR, India — In a small, colorfully painted house on India’s eastern coast, G. Sonali Reddy cooks meals and feeds her younger siblings by day and rocks them to sleep at night, hoping to assuage their fears, just as her mother would.

Sonali, still a child at 14, is her family’s caretaker. Several years ago, her father took his own life after the failure of the family’s business selling spare trolley parts. Then in May, her mother, Sabita, contracted Covid-19 as a calamitous wave of infections swept across India.

Within hours of reaching the closest city hospital with medical oxygen, Ms. Reddy was dead.

“My mother kept us safe like an umbrella does, from the heat and rain of life,” said Sonali, holding back tears. “I imagine her being close to me. That’s what keeps me going.”

Sonali and her siblings are among more than 3,000 Indian children who have been orphaned during the pandemic, according to state governments. They are a heart-rending testament to the devastation wrought on families as the coronavirus has erased hundreds of thousands of lives across the country.

Even with all that has been lost, the orphans’ plight has punctured the public consciousness, an acknowledgment of the profound challenges facing a country already full of vulnerable children.

Indian states have announced compensation of about $7 to $68 per month for each orphan, along with promises of food and free education. Prime Minister Narendra Modi vowed in a tweet to “ensure a life of dignity and opportunity” for the children.

But advocates fear that when the attention inevitably fades, the orphans will be left susceptible to neglect and exploitation.

Already, the children, shellshocked in some cases from the loss of their entire families, have found it difficult to obtain death certificates to qualify for government benefits. Some will also find it hard to return to school.

In the longer term, the many orphans from poor families in remote areas face the risk of human trafficking and child marriage. Trafficking of children is rampant in India, where they are enslaved for work or sex. And the country has the largest number of child brides in the world, according to Unicef.

Adoption is not an option for many of the orphans, given cultural taboos against the practice. Older children, in particular, often cannot be matched with adoptive families.

“The government is trying to save its face as the catastrophic tragedy ravaged India,” said Medha Pande, a law student at Delhi University who has written about sociolegal issues arising from the pandemic.

“They came out looking unprepared,” she added. “They are just creating a subgroup out of a larger group of vulnerable children, saying they can easily look after them.”

On a recent morning, officials in the village of Pattapur, in Odisha state, arrived at Sonali’s home, where her maternal grandmother moved in after her daughter’s death.

They had come to deliver an “orphan pension” to the children, enough money to last for the summer. Bank accounts were opened in their names. The officials dropped off large bags of rice.

Saucer-eyed, Sonali listened carefully as they rattled off a list of instructions for using her bank account. Her siblings — Jagabalia, 8, and Bhabana, 5 — looked on listlessly, clutching their sister’s blue dress.

Even before her mother’s death, the family had a meager existence. Newly widowed, Ms. Reddy opened a small snack shop in the front room of their home. She spent what little money she had to provide after-school study for Sonali.

With her father gone, Sonali was especially close to her mother.

“My siblings beg me: ‘We want to go to mummy,’” Sonali said as she fiddled with her thumbs. “When our father passed away, we thought, ‘At least mummy is there.’ Now, the virus has taken her away too.”

Hundreds of miles away in the southern city of Hyderabad, G. Sathwik Reddy, 13 — no relation to Sonali — hears similar pleas from his sister after their parents died during the peak of India’s recent wave of infections.

When his sister, Haanvi, 3, asks for “mummy” and “daddy,” he tells her simply, “They will come home tomorrow.”

Their father, Gopal, had a small business making iron fences for farms. Like millions of middle-class Indian families, they saved as much as they could to send their children to a private school. Their mother, Deepa, cooked special chicken dishes for her children every Sunday and helped Sathwik with his homework.

In April, Mr. Reddy, Ms. Reddy and the children’s grandmother contracted the virus within days of each other. With chronic oxygen shortages in India and hospitals turning away patients, the family worried about their chances.

Once at a hospital, Ms. Reddy became gravely ill. She remained intubated for two weeks, unconscious. Mr. Reddy’s lungs, too, rapidly deteriorated. By early May, all three were dead.

At the crematory, Sathwik saw his father’s face for a brief moment from behind a plastic sheet. He became numb with shock. Now, he often cries himself to sleep.

“I must stay strong for my sister,” he said.

In the dusty plains of northern India, Shawez Saifi, 18, also finds himself sniffing back tears in the dark of night, when his sister jolts awake, screaming out for their mother.

Their parents, Shamshad and Shabnam, became sick in April, and Shawez took them to a local doctor, who recommended a coronavirus test. But with little money to go around from the dwindling work that father and son did on construction sites, Shabnam suggested that they return to their home in Murad Nagar to recuperate.

The children slept on the veranda outside their one-room shack while the parents locked themselves inside. After their condition quickly worsened, they moved to a relative’s house. A few days later, Shabnam was dead. Her husband died a few days after that.

When Shawez, who had given up his studies to work with his father, returned home without his parents, the landlord had locked them out, saying he would give them the key only after the rent was paid. His uncle borrowed money to cover some of the debt so that Shawez and his siblings could collect their belongings.

Shawez’s younger sister, Kahkashan, 9, has been hit the hardest. Nearly every day, she picks up the phone and dials her mother, talking to her as if she were on the other end.

“Mother, when will you come? I miss you,” she says.

“My only dream is to educate my siblings,” Shawez said. “My mother would call me when I would be out for work and ask, ‘Son, it is getting late. When will you come home?’ Now no one will call me anymore,” he said.

In Pattapur, Sonali, too, feels as if she has lost her most powerful protector.

In a thick diary, on the page next to the one on which she has noted the dates of her parents’ deaths, Sonali jotted a poem dedicated to her mother.

On a recent day, she read it aloud to her siblings.

Undergoing the ups and downs of life, our mother brings us up.

Our mother is the tallest in this world, she is the one who can keep us well.

Suhasini Raj has worked for over a decade as an investigative journalist with Indian and international news outlets. Based in the New Delhi bureau, she joined The Times in 2014.

Honor This Season for Giving Back!

Coronavirus: How India’s lockdown sparked a debate over maids