“Don’t tell your girls to wear decent clothes – tell your boys to behave,” reads a sign at a vigil for the victim of a brutal 2012 gangrape in New Delhi (Credit: Getty Images)

Every day around the world, 137 women are killed by an intimate partner or a family member. India’s Action for Equality programme seeks to end violence against women – by focusing on teenaged boys.

Eighteen-year-old Omkar used to take out his anger on his younger sister Rutu. Now, his mother Kanta says, he talks to her respectfully and calmly.
He also helps much more around the house. “He makes tea if somebody’s home; he also does household chores like cleaning the house and sorting out things. He behaves differently than other boys of the community – he’s very well behaved,” says Kanta.Omkar is one of more than 5,000 boys in Pune, India to participate in a programme called Action for Equality (AFE). Launched by the Equal Community Foundation (ECF) in 2011, the AFE programme is seeking to fight violence against women – with teenaged boys.Battling for gender equality is like fighting the current of a rushing river, says Christina Furtado, executive director of ECF. “We’ve been telling [women], ‘It’s very important for you to fight for your rights.’ We’ve managed to pull a few women out and put them on a life raft,” she says.
But when solutions focus solely on women, “what you’re not doing is not changing the flow of the current,” she says. “Because at the end of the day, educated and empowered women will go home with violent and abusive men.”

In AFE, boys aged 13 to 17 spend 43 weeks studying education curricula designed to teach them about gender-based violence, disrupt gender norms, and make their communities more equitable and safer for women and girls.

As the UN reports, violence against women is a worldwide scourge. Some studies show that up to 70% of women have experienced physical violence from an intimate partner, whether physical or sexual, in their lives; worldwide, 137 women are killed by an intimate partner or a family member every day.

In India, this violence against women came brutally to the fore when a 23-year-old student was gang raped on a city bus in Delhi, India in 2012. What followed was a deluge of stories of sexual assault, creating a kind of #MeToo moment for India. This is why programmes like this have such an important role to play. Even so, conservative Pune, India may seem an especially unlikely place to launch a grassroots campaign for gender equality, let alone a place where teenage boys would lead the charge. In low-income, traditional communities like this one, both boys and girls often are bound by old-fashioned customs that dictate that housework is women’s work – and that men can sexually, verbally, and physically abuse women without consequence.

The programme’s facilitators are people who teenage boys tend to look up to: young men in their 20s. ECF requires participants to attend 60% of sessions and to complete a capstone “action project” – a community solution that they then implement. About 80% of participants graduate.Eighteen-year-old Akshay initially joined the AFE programme in 2014 as a volunteer to conduct the sessions. He later enrolled in it himself, along with his two brothers. Since he graduated from the programme, he says, he has become a role model for other boys in the community. 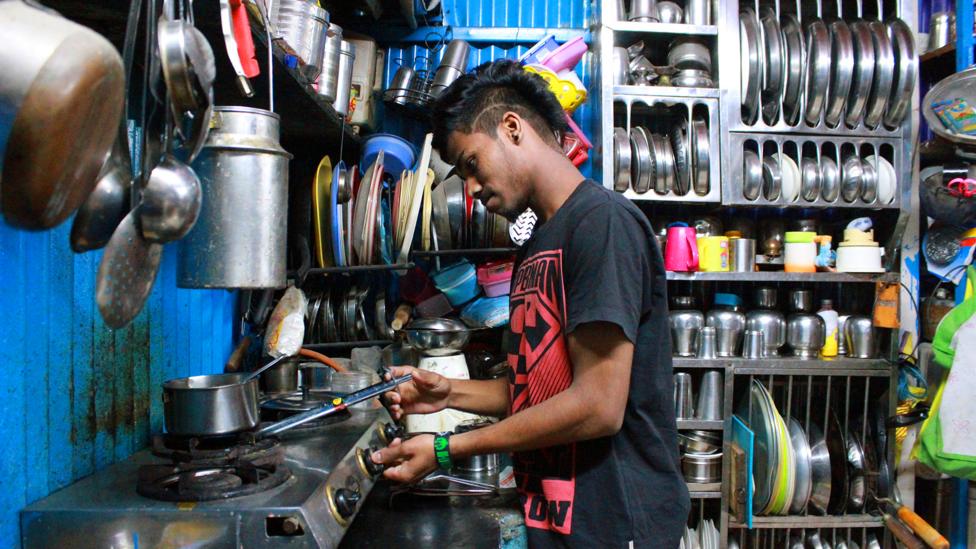 Akshay, who joined the programme back in 2014, makes chai tea at home (Credit: Chhavi Goyal)

Like Omkar’s mother, Akshay’s mother Sujuta says she has noticed significant changes in his behaviour. “He has been sharing the responsibilities at home – and not just him, but all of the brothers as well,” she says. “In fact, for a month, I have been unable to do any work in the house because of his help.”

In Akshay and Omkar’s neighbourhood, many boys start drinking alcohol at age 14 or 15. Some are addicted by the time they reach adulthood. Alcoholism is widespread in low-income communities like theirs across India, and men who abuse alcohol are more likely to abuse their wives and harass girls.

It is a problem that significantly impacts women. Girls are afraid to play outside due to lewd comments from drunk boys and men, and women often are afraid to call police or confront perpetrators directly because they believe authorities either will blame the victim or won’t believe them.

But both Omkar and Kanta, equipped with the knowledge to spot signs of sexual harassment and violence, feel empowered to report incidents to police and community leaders. Omkar notes that teenage girls trust him because they know his ECF experience means he has the education and the compassion to help them when they feel unsafe. 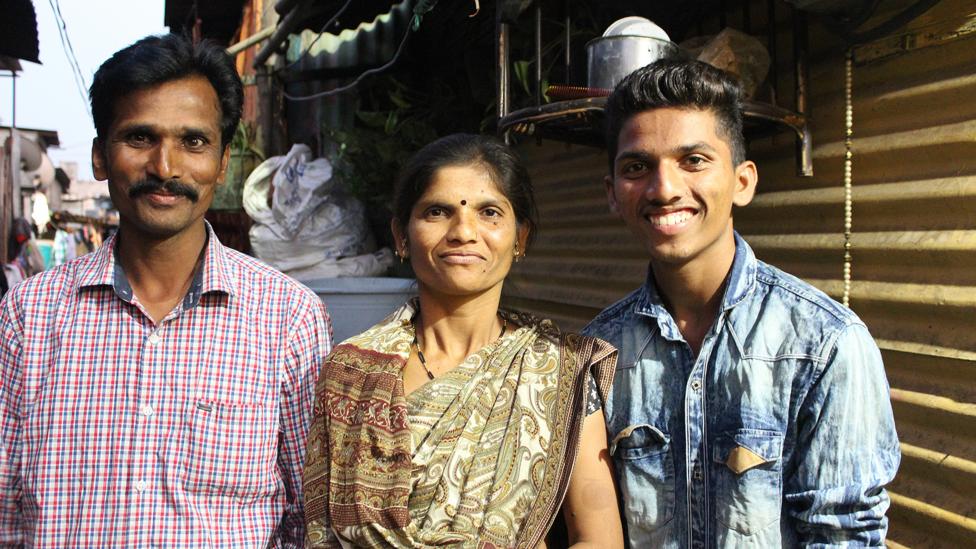 Omkar with his parents Raju and Kanta, who say they have seen significant changes in his behaviour since starting the programme (Credit: Chhavi Goyal)

Akshay isn’t afraid to intervene either. He recalls overhearing a drunk man fight with, and then hit, the man’s wife. Akshay and his friends went into the man’s house and tried to drag him outside, telling the woman to call the police. As a result, the man went to an alcohol rehabilitation counselor, drastically reduced his alcohol consumption, and, Akshay says, curbed his violent streak.

“I used to think [girls] are weak, that they are scared of going outside. But then I came to realise they were scared because of patriarchy and then I started respecting them,” Akshay says.

Omkar is already passing his knowledge on to the younger generation. With a male friend, he coaches 10 boys who are too young to join the AFE programme in gender equality concepts – teaching them not to catcall girls, to help out around the house, and to speak up if they see men being abusive.

“We want to encourage the boys to take initiative and we are there to support them and everything that they do,” says Suhasini Mukherjee, programme associate at ECF. 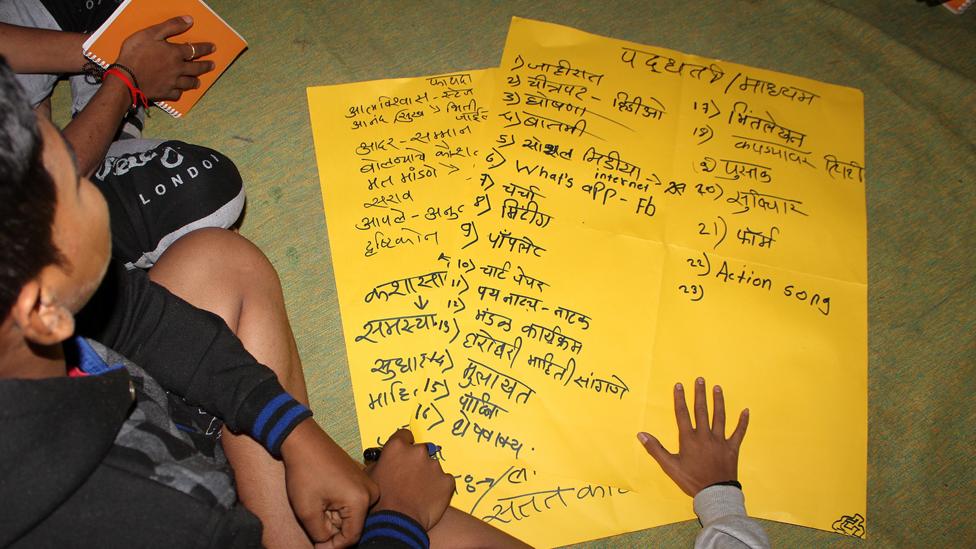 However, as boys learn how to help girls who are being harassed, they sometimes take this lesson too seriously, says Pravin Katke, programme coordinator at ECF. They’ll tell their sisters what not to wear, or make them afraid to go out alone. While well intentioned, this overprotectiveness can lead to dominance – exactly what ECF is trying to address.

In the starting stages of the programme, mentors emphasise that boys should only offer help when girls ask for it or when they are obviously in distress. They also tell them to call authorities in extreme situations, rather than potentially aggravating the situation by involving themselves.

In one such situation, Akshay heard his neighbours were arranging a marriage for their underage daughter (though the minimum legal age to marry for girls in India is 18, child marriage is still practised). He knew the girl’s parents would suspect he was her boyfriend if he confronted them. Instead, he alerted legal authorities and women’s rights organisations to convince the parents to cancel the marriage.

While ECF’s programme is tackling gender issues at a local, grassroots level, Promundo, an organisation founded in Brazil in 1997 and now based in Washington, DC, delivers a similar model on a global scale to men and boys in more than 25 countries, including Brazil, India, the US, and Balkan countries. Promundo’s Program H (for “homens” or “hombres”, the respective Portuguese and Spanish words for “men”) was created to mitigate urban violence among young men. Program H participants are between ages 10 and 24, and meet weekly for four months in community spaces such as schools; as at ECF, the groups are small, averaging 12 participants, and are facilitated by young men in their 20s. Like ECF’s, Promundo’s lessons are focused on topics such as violence against women, sexuality, and gender norms such as caregiving and household work. 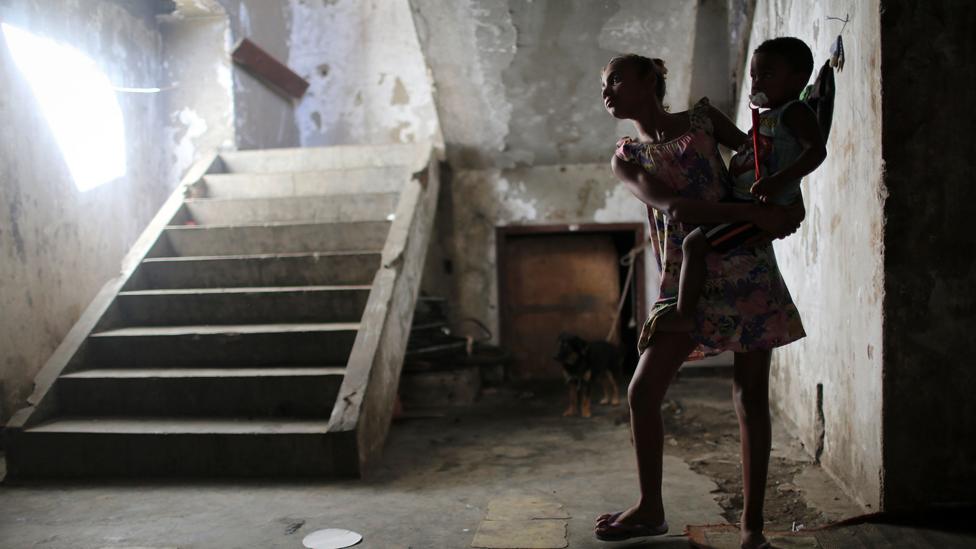 Globally, girls spend more than 40% more time on unpaid work, such as caring for younger siblings, than boys of the same age (Credit: Getty Images)

To measure its impact, Promundo created the Gender-Equitable Men (Gem) scale, which assesses self-reported shifts in participants’ behaviours such as safe sex and family planning, decrease in violence against women, and improved attitudes toward women and gender equality. Between 2002 and 2012, according to a study by Promundo that is not yet published, Promundo participants in Ethiopia reported their use of violence was down by 20%, and participants in India stated they were two to three times more likely to use condoms than before. However, while Promundo tries to corroborate participants’ responses with family members’ and friends’ views of participants’ behaviours, the self-reported nature of the data leaves room for error.

Promundo encourages boys to first change their behaviours in the safe space of the classroom, then to implement these changes in public.Still, grassroots gender activism has a precarious hold, especially in communities where traditional gender norms can be deeply entrenched.In the Democratic Republic of Congo, Promundo classes address the social taboo of men doing chores, which resulted in one man sweeping the floors in his house. His wife was pleased, but noticed he would only sweep inside, not in the backyard – he was still afraid other men would see and make fun of him. 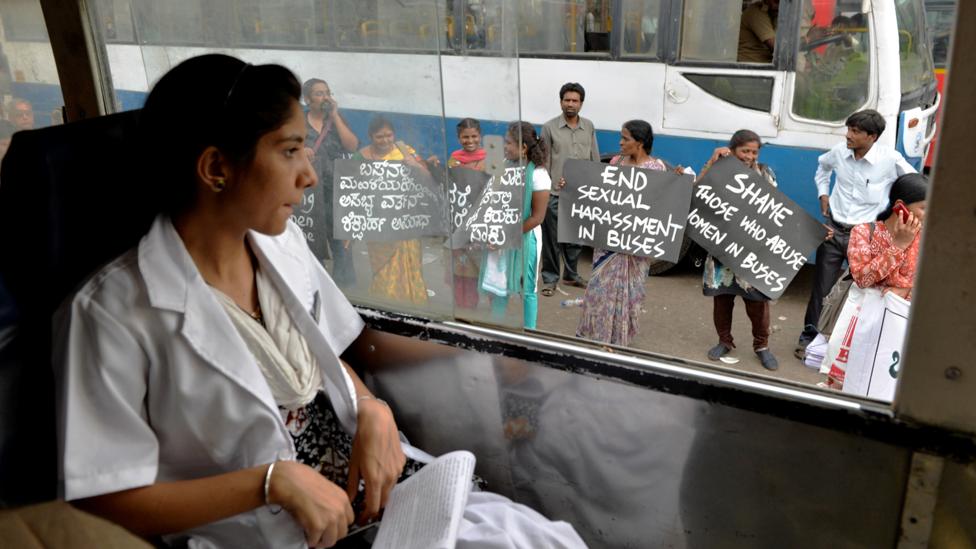 Protestors call for the end of the harassment of city bus passengers in Bangalore, where a study found two-thirds of female passengers face regular violence (Credit: Getty Images)

Both Promundo and ECF found that, while it is relatively easy to change teenage boys’ attitudes around gender equality, it is more difficult for boys to publicly implement solutions and sustain behaviour changes when communities are resistant. To address this, ECF is revamping its curriculum for the later, action-oriented stages of its programme, and Promundo is working to implement change at an institutional level in schools and healthcare facilities by partnering with these institutions to incorporate Program H curriculum there.

Giovanna Lauro, Promundo’s vice president of programmes and research, says, “Even if we change individual young men’s attitudes and behaviours, they still live in a world that hasn’t changed.”But with programmes targeting teenage boys’ behaviours, those boys are a step closer to changing the world themselves. By identifying the root causes of gender-inequitable behaviours and implementing solutions at both an individual and community level, boys can learn to advocate for not only girls and women, but also for themselves. As ECF and Promundo have shown, tailoring programmes to meet specific community needs, then adapting the curriculum for a broader audience, can have far-reaching impacts.

By Elaine Murphy in Pune, India – Repost from BBC Future